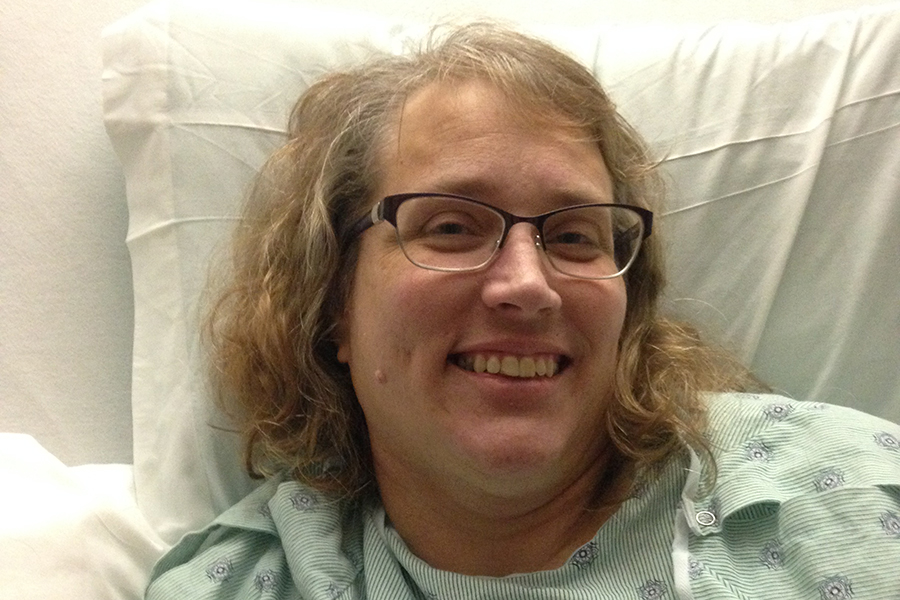 "I'm in total remission. All of the nurses and my doctors have been amazing; the whole team has been phenomenal."

Holden is the only center in Iowa to offer CAR T-cell therapy, which uses a patient’s own white blood cells to detect and kill cancer cells and is among the first sites in the nation to use the therapy to treat patients, such as Arlene Barclay.

"It’s a new lease on life," says Barclay, 52, who was diagnosed in December 2017 with diffuse large B-cell lymphoma, the most common form of non-Hodgkin's lymphoma, a cancer that starts in white blood cells.

She was among the first patients at Holden to receive the therapy, which was approved by the Food and Drug Administration (FDA) in 2017 for adults with certain types of non-Hodgkin's lymphoma who have relapsed or received two other kinds of treatment that failed, or children and young adults with acute lymphoblastic leukemia that didn’t respond to therapy or have relapsed.

Barclay initially was included in a clinical trial but didn't meet all of the criteria to have the procedure done. In the meantime, her condition worsened as the cancer progressed.

She underwent two types of chemotherapy and with no improvement, doctors proposed the CAR T-cell treatment, as she then met the criteria for its use.

"It was very new," Barclay says of the therapy, adding that the newness didn't worry her. "At that time, I didn't feel I had much other option. The disease was progressing faster than the chemo was helping."

Hospice had been proposed to manage her pain, she recalls, "but I wasn't willing to give up. It wasn't an option." Barclay chose to proceed with the new treatment.

With CAR T-cell therapy, white blood cells known as T-cells are extracted from the patient’s bloodstream and sent to a lab. Barclay remembers having to lie still for six hours without bending her arms during the procedure. Lab technicians add genes to the T-cells that produce chimeric antigen receptors on the surface of the cells, converting them into CAR T-cells.

Patients must undergo three days of chemotherapy in preparation for the extraction, so their bodies don't reject the converted cells. The CAR T-cells are then infused back into the patient’s bloodstream. The newly added receptors allow the CAR T-cells to recognize cancer cells and kill them.

Barclay experienced one of the side effects of the treatment while she was hospitalized, going through a few days where she felt "completely out of it," but after a few weeks in the hospital, she was discharged at the end of January 2019.

"I'm in total remission," Barclay says, adding that she is grateful for the care provided. "All of the nurses and my doctors have been amazing; the whole team has been phenomenal."

Barclay and her husband, Brian, who recently celebrated their 30th anniversary, have two adult daughters.

Due to fatigue and some balance issues, she hasn't been able to return to her job as a pharmacy technician but is working to improve her stamina.

Barclay has heard the CAR T-cells described as "super" cells, and she agrees.

"They do their magic and they attack," she says. "For me, it's made the difference between life and death. It has been a miracle."

Every patient’s story is personal and can inspire others. We invite you to share your experiences with Holden.