Shows promise for use with other, more common cancers

People with a rare cancer will have greater access to a drug enabling targeted diagnosis and treatment, thanks to work led by a team of researchers at University of Iowa Health Care’s PET Imaging Center. 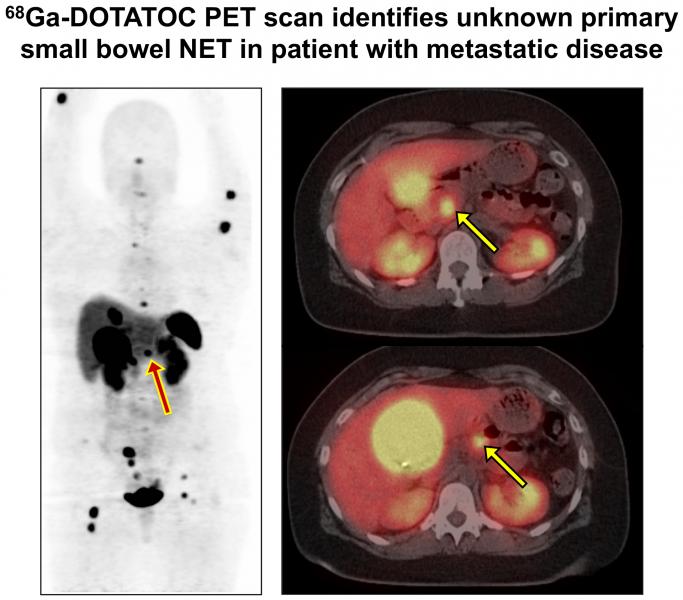 The University of Iowa received approval from the U.S. Food and Drug Administration (FDA) for a new process that can produce double the quantity of the radioactive isotope gallium-68 (Ga-68) in a cyclotron compared to current devices. The isotope is a key ingredient in Ga-68 DOTATOC, a drug that pinpoints the source of neuroendocrine tumors (NETs).These slow-growing tumors originate in neuroendocrine cells that regulate hormones, and they can spread to other parts of the body.

The cyclotron process for producing Ga-68 is also expected to be applied in drugs that would enable improved diagnosis and treatment of other, more common cancers, such as prostate cancer.

As one of the world’s leading NET research centers and the first Neuroendocrine Tumor Center of Excellence in the U.S., Holden Comprehensive Cancer Center sees NET patients who travel from all parts of the country.

While considered a rare tumor, the incidence of NETs has increased seven-fold over the past few decades and they continue to be misdiagnosed or diagnosed only after spreading to other parts of the body, which is the case about half the time.

Ga-68 DOTATOC is injected into a patient and lights up on a positron emission tomography (PET) scan image, showing the precise location of the primary tumor and any distant tumors, enabling the care team to devise the most effective treatment plan. Additionally, because NETs tend to be diagnosed late, it is even more essential to trace and treat the primary tumor to prevent further spread.

“Patients need this drug to both locate an active tumor before treatment and confirm in follow-up scans that the treatment has worked. This new process doubles the number of patients we can scan per day,” said lead scientist David Dick, PhD, clinical associate professor of radiology in the Division of Nuclear Medicine at the UI Carver College of Medicine.

Ga-68 DOTATOC received FDA approval in 2019, based on UI clinical trials that demonstrated that imaging with this drug is safe, effective, and convenient for children and adults with small bowel or pancreatic NET.

Previous processes to produce this isotope required creating germanium-68 (Ge-68) and collecting the Ga-68 that remained after the Ge-68 decayed, as radioactive isotopes naturally do. The cyclotron process allows scientists to create Ga-68 directly, eliminating the four hours of downtime between every batch required by the current production device.

The Iowa team developed the new process in collaboration with GE Healthcare. The University of Iowa has waived rights to exclusive use of the process, enabling scientists elsewhere to use it.

“Ga-68 decays and becomes unusable after few hours, so it must be produced onsite. We want to make sure that any patient who needs access to it will have it,” Dick said.

In addition, “the FDA acknowledging the viability of the cyclotron-produced Ga-68 DOTATOC, opens the door for other scientists to be able to use this process to create Ga-68 compounds for other cancers,” Dick said. “For example, Ga-68 PSMA-11 was recently approved for PET imaging of prostate cancer, offering a tool to help diagnose and treat prostate cancer earlier and less painfully. We are excited for all the possibilities this new process has to transform cancer care.”